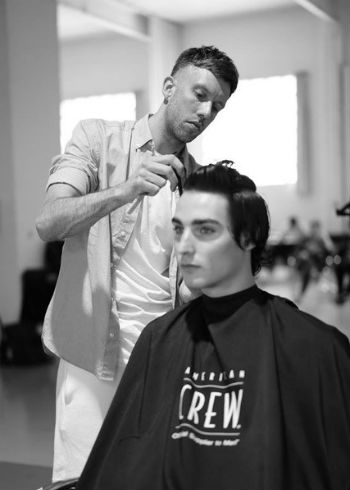 “In my blog I would like to share my experience in Barcelona for the American Crew All Star Challenge 2018. I had my eye on this competition for a few years. It was called ‘Face Off’ before the change. So to nally be competing in the Global Final representing the UK was a dream come true. Once I landed in Barcelona I knew I just had to savour and cherish every moment. We got picked up and taken to our hotel on the Wednesday, which was an amazing place. The two days of the photoshoots were Thursday and Friday. It was done alphabetically so being from the UK I was on the Friday. We got up nice and early on the Thursday and made sure that we all went to support the guys who were on day one. All contestants were so nice that it wasn’t a competition atmosphere. We were all mesmerised by each others work. We were all routing for each other and it was a good feeling.

After getting a feel for what Friday would bring, we headed back. I really was in a good mind frame at this point, as you can’t over think what your going to do because you have to choose the model on the day and you just didn’t have a clue who you would get. So I slept a lot easier going into Friday with a pure open mind. I was slightly nervous, I guess, but more excited. I soon realised what I was most nervous about and that was picking the number to decide what order I got to pick the model. Safe to say it was like a lucky dip when you go to a fair.
As I walked in I saw the model I wanted and I just prayed I got the rst pick. My turn came – I was the fourth hairdresser to choose - and luckily, I ended up with my rst choice model. The most stressful part in my eyes was over. Now it was for the fun part. I went to sit in the corner and plan out my haircut to the point. I knew what I wanted to do, but wanted it engrained into my head. I was so excited to get going. We had separate slots: 45 minutes to cut the hair, 30 to choose an out t and style the model, 30 for MUA and the hardest part: 30 minutes to shoot and choose your nal image out of hundreds of shots. Sounds like a long time, but when your in it, the time just ew by!

This was by far the best experience in my career and I was so proud of my image. The night of the show itself was incredible. The atmosphere was insane and I was backstage with all the other nalists watching the show
on two tv’s. It seemed like a lifetime backstage, and if I’m honest it was such an intense emotion. I can’t even explain in words how I felt backstage. Fifteen friends were made on this experience that will never be forgotten. The time came and now it was our turn to go out on the big stage. When the doors parted, I’m sure everyone felt the same elated feeling as myself with 4.000 people applauding as we walked out. I wasn’t sure if I was sweating from the excitement or the lights themselves. As David Raccuglia started speaking, I realised just how much I felt like an ant on the huge stage itself. The announcement came that Russia’s very own Vitaliy Pimenov took the title of the American Crew Global All Star Winner and the crowd erupted. Once we walked off backstage, the congratulations party started and all 14 other countries were over the moon for Vitaliy. A top guy, true gent and well deserved winner.”

This website uses cookies to improve your experience while you navigate through the website. Out of these, the cookies that are categorized as necessary are stored on your browser as they are essential for the working of basic functionalities of the website. We also use third-party cookies that help us analyze and understand how you use this website. These cookies will be stored in your browser only with your consent. You also have the option to opt-out of these cookies. But opting out of some of these cookies may affect your browsing experience.
Noodzakelijk Altijd ingeschakeld

Any cookies that may not be particularly necessary for the website to function and is used specifically to collect user personal data via analytics, ads, other embedded contents are termed as non-necessary cookies. It is mandatory to procure user consent prior to running these cookies on your website.